Paragliding over the Boppard Rhine Loop

Fly over the Rhine

During the summer months Paragliding in Boppard is one of the main attractions of the whole region. Given the sensational views of the Boppard Rhine loop as well as the Boppard Hamm it is telling its own tale. Feel free like a bird and let the wind carry you over the Rhine. The transport to the starting point can be made by foot or by the Boppard Chairlift.

Paragliding over the Rhine Loop

It starts on the left bank of Gedeonseck, just below the legendary Four Lake View. The landing site is located on the opposite side (on the other side of the Rhine), just outside the village of Filsen. It is seen from the starting point between the railway line and the trunk road in front of the last houses on the left. Distance between take-off and landing place is approximately 700m. The Rhine is about 300m wide at the Boppard Hamm. 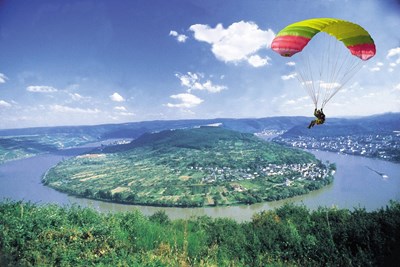