Alpine Hiking Path at the Rhine

The Via Ferrata Boppard is one of the few alpine fixed rope routes north of the Alps. To create this, rewarded with one of the highest ratings of excellent hiking adventure points by the German Hiking Institute, a total of 10 conductors, 130 nerf bars and about 180 meters wire were mounted. Overall, the via ferrata offers 11 passages and has been released for children over nine years.

It takes about three hours for the entire route of the Via Ferrata Boppard. Highly recommended are especially sturdy shoes with a good profile and weather appropriate clothing. Gloves are not a must, but facilitate one or the other passage. Equipment needed for hedging can be rented on site.

Shortly before the exit of Boppard towards Koblenz and within walking distance from the hotel is the Remigius parking. This place marks the entrance to Mühltal, where, besides the Via Ferrata Boppard, also the Rheinburgenweg leads towards the Four Lake View/ Gedeonseck. After just a few minutes you reach the via ferrata.

Your entry starts with a vertical descent over a seven-meter-long ladder and then follows the path through iron brackets that are lush secured and carved into stone. After this first passage the appeal of Via Ferrata Boppard extends. After a first hiking passage you reach another vertical. With the help of iron pins in the wall you will manage this part and will successfuly surmount the corner. This is followed by an extensive hiking passage. You are now already in the midst of the vineyards of the Boppard Hamm. Some beautiful viewpoints arise on the Rhine loop to Boppard. The end of the Via Ferrata Boppard then forms a more than 40 meter high cliff. Entry is via anchored iron brackets unsecured before the further ascent continues secured. At the end of this part, the exit of the Via Ferrata Boppard is reached. Follow the narrow forest paths to Gedeonseck and Vierseenblick. In good weather you have a clear view over the Rhine loop and can even spy the Marksburg and the Hostile Brothers. The descent is either on foot towards Mühltal or by chairlift.

More informationon the via ferrate Boppard you can find here. 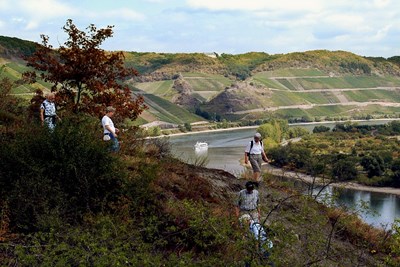 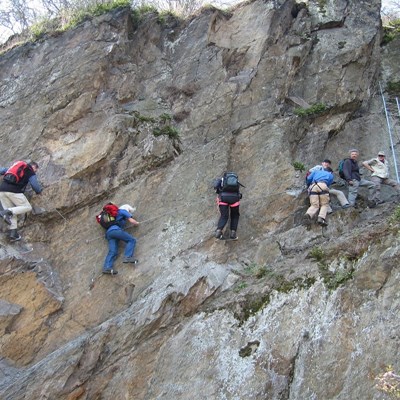