Castle Drachenfels is a ruin out of the 10th century which lies at the gates of Cologne. The mediaeval hilltop castle thrones on 321 meters above Konigswinter and can confidently be described as one of the most famous landmarks the Siebengebirge has to offer.

The castle and the rock it is built upon consist of volcanic stone (Trachyt). It was used during the middle ages for the construction of churches in particular. A popular example is the Cologne Cathedral whose facade was made of Drachenfels Trachyt. This circumstance was boon and bane at the same time because it involved the castle`s lords from time to time in battles and besiegement. Castle Drachenfels arose as a so called swelling dome. That means it thrones right on a not erupted volcano. As a consequence, chunks constantly rolled down the descent. The very popular building material already had been used by the Romans down the Rhine. Older etchings illustrate the chute of the debris on which the stones rolled down the descent into the Rhine.

Due to the burgeoning Rhine Romanticism Drachenfels still exists today. The increasing interest in the home region combined with a growing instinct for the beauty of the landscape added to that decisively. The popular poet of the Rhine Romanticism, Heinrich Heine, was amongst the students who moved to Drachenfels in 1819 to celebrate the anniversary of the Leipzig battle of nations. The experience inspired him to write the poem „The night on the Drachenfels“. Lord Byron`s visit in 1816 as well contributed to the interest in the castle and the region. This new attention entailed that extensive measures were taken to secure the castle long-term. Otherwise it would have fallen off the hilltop. 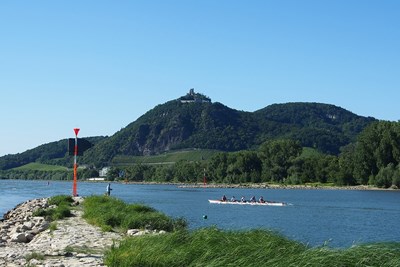 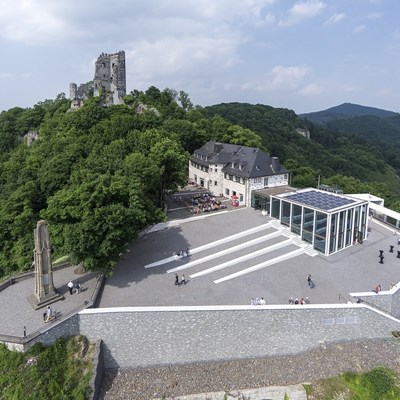 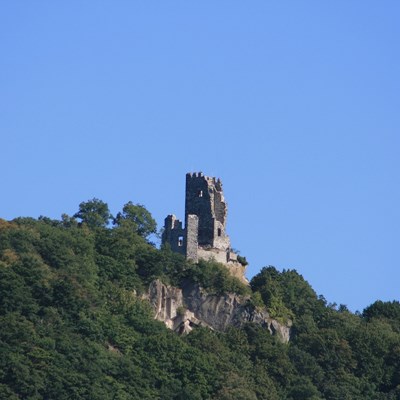