Castle Rheinfels is located above the small village St. Goar within the UNESCO world heritage Upper Middle Rhine Valley about a 15 minute drive away from Boppard. This ruin of a former spur castle is one of the biggest castles on the Middle Rhine. Together with castle Katz it builds an impressive ensemble of castles within the range of vision and forms a prime example of Rhine Romanticism mirroring castles, vineyards and the Rhine.

The history of castle Rheinfels is multifaceted and reaches back to the year 1245, when the lords of castle Katzenelnbogen built it as a toll castle. The castle was expanded continuously into a fortress in the following years. Between Bingen and Koblenz it was the biggest fortress for a very long time, only surpassed by the Ehrenbreitstein. It was classified as impregnable for many years. Not until the end of the 18th century, it had to succumb to French troops, because of their superior weapon`s technology during the Seven-Years-War.

The function of the castle Rheinfels

The complex of castle Rheinfels derived the plans and designs of Wilhelm Schäfer. The core castle developed between the 13th and 14th century before it was enlarged into a fortress in the 17th century. By the extension of castle Katz on the opposite side of the Rhine initiated by the noble family von Katzenelnbogen both fortifications formed a strategic Rhine barrier to collect tolls among the castles on the Middle Rhine. Three quarters of the ruins existing today can reliably be assigned to the fortress reconstruction. 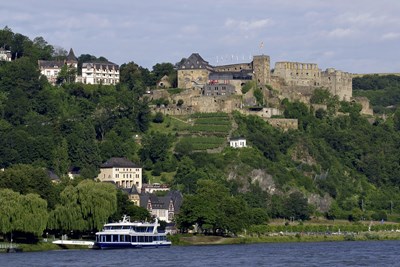