The German Corneris an artificially raised headland in Koblenz at the confluence of the Mosel into the Rhine. In 1897 a monumental equestrian statue of German Emperor Wilhelm I. was built. It was designed as a monument to the German Reich founded in  1871. Built by the Rhine Province to honor Kaiser Wilhelm, the Memorial stands in tradition of many erected monuments in Germany .

The base of the statue, damaged in the Second World War, severely served from 1953-1990 as a memorial of the German Unity. A replica of the sculpture group was installed back on the pedestal in 1993 after previous controversial discussions .

The German Corner is the landmark of Koblenz and a major attraction for tourists. On the left bank bank you can find the Rhine plants (Konrad-Adenauer-Ufer), on the right bank of the Mosel is the Peter Altmeier-shore.

Shortly after the death of Kaiser Wilhelm I, the idea of the emperor, who had brought the complete unification of Germany after three wars, arose to erect a monument. Three years later, in 1891, Emperor Wilhelm II., grandson of the deceased, chose the German Corner in Koblenz as a suitable location. To create space for the monument a port of refuge was filled, who was at that time on the Mosel River estuary. The German Corner in its present form was created.

On August 31 1897, the copper-driven monument of Emperor Wilhelm I. was inaugurated in the presence of Kaiser Wilhelm II..

Destroyed in March 1945 by artillery shelling, Theodor Heuss dedicated the riderless base to the Memorial of German unity in 1953 . Until 1993 a flagpole with the German flag was enthroned. In the fall of 1993, finally, a reconstruction of the monument has been raised to the pedestal. The 37 meter high monument - 14 meters alone account for the way to the equestrian statue of Emperor Wilhelm I. - is now a magnet for more than 2 million people every year, and since 2002 part of the UNESCO World Heritage "Upper Middle Rhine Valley".

Mor information on the German Corner can be found here. 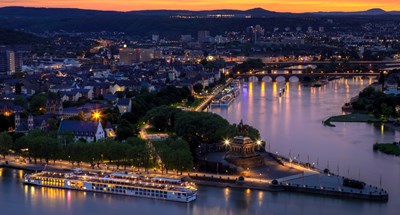 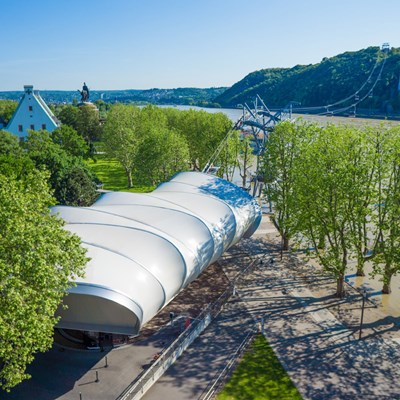 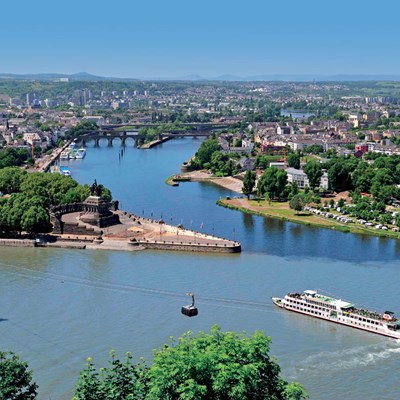