The chronicles of the Bellevue Rheinhotel

It all began in November 1887, as founder Josef Breitbach bought the "Villa Mosel" at an auction.

1st generation: the era of the build-up

Josef Breitbach was born in 1858 and grew up in the parents’ guesthouse comprising own viniculture in a small place called “Weiler Bach” close to Boppard. In good times he caught the chance to leave his home, in order to gain experience as a waiter in Wiesbaden, Cannes, San Remo, Bern and Monaco. Together with his wife Laura, who was the daughter of a guesthouse owner too, he some years later bought the two adjoining hotels “Rheinhotel” and “Bellevue”, as well as the small alley in between. 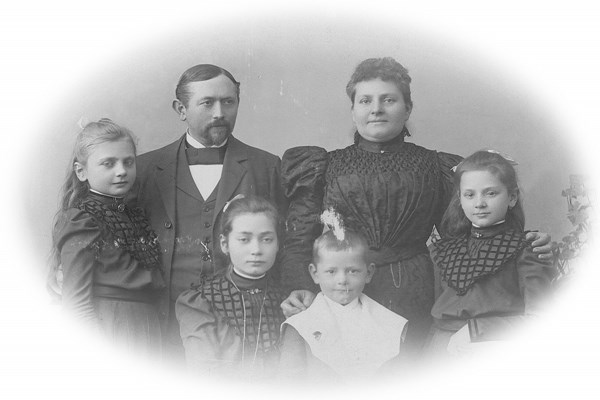 In November 1910 Josef Breitbach tore down both hotels and rebuilt them within only half a year - “for the first time using electrical light” in day- and night-shifts - this still remaining, characteristic building. In May 1911 it was reopened as the “Grand Hôtel Bellevue”, among other things three rooms with private bathrooms, central heating and a telephone connection. The hotel had the telephone number 2 in Boppard (number 1 was the hospital).

2nd generation: Difficult times during and after the World Wars 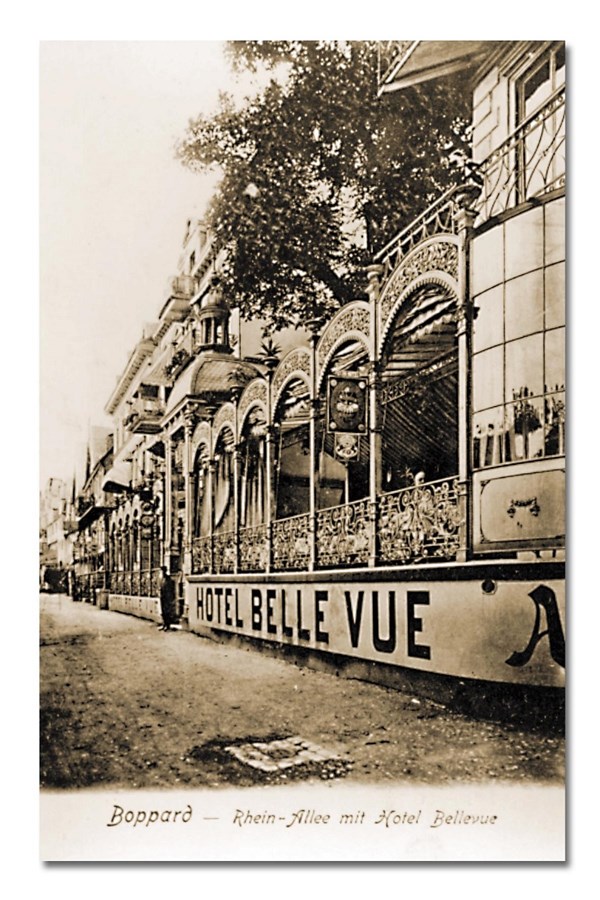 In 1928 the daughter Laura Breitbach, married to the lawyer Dr. Fritz Fußhöller, took over the hotel. Despite hard times after the first World War and a high inflation rate, she constructed a new building with 28 beds in 1930. (Today, you can find here the conference room “Atelier”).

In the beginning of 1934, the first German hotel cooperation, called “6 vom Rhein”, was founded. The participating hotels were the following: “Bastei” in Cologne, “Dreesen” in Bonn-Bad Godesberg, “Fürstenhof” in Remagen, “Riesenfürstenhof” in Koblenz, “Bellevue” in Boppard, as well as “Schwarer Bock” in Wiesbaden. This cooperation lasted until the outbreak of the war in 1939.

Similar as during and after the 1st World War, the hotel was again confiscated in 1941 and used as a military hospital. Afterwards, officers of the occupying forces stayed at the hotel until 1949. When the hotel was handed back to their originally owners, it was completely looted: Laura Fußhöller had to start all over again.

From 1951 onwards, the son Horst Fußhöller (carrier of the distinguished Federal Cross of Merit), stepped into the business together with his wife Lissy Fußhöller (daughter of the master joiner Henrich from Boppard), in order to support his widowed mother.

Already in 1952, the hotel property was enhanced by buying an adjacent house. The kitchen and the economical wing were extended. In 1965, he built the specialty restaurant “Pfeffermühle”, the winter garden, the bar as well as the old wine cellar. In 1973, the old part of the hotel, “Villa Mosel”, and the adjacent buildings behind it, were torn down, and on a from floodwater protected foundation, 4 floors with hotel rooms, swimming pool, sauna, conference centre and rooftop terrace were built. 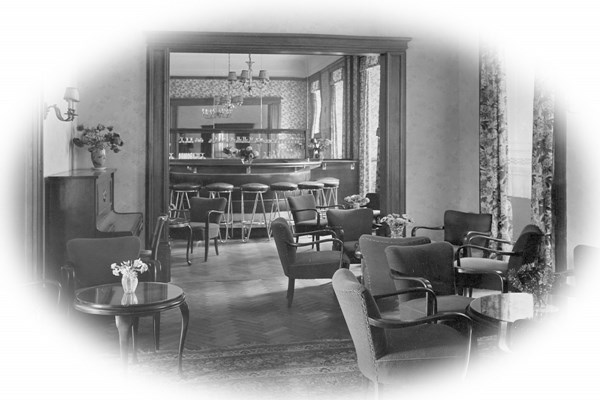 In 1985/86, another adjacent part of the original building was torn down. Now, another 14 hotel rooms, the “Rhinegold suite”, and the wellbeing and spa area with steam bath and relaxation room with panoramic view emerged.

In summer 1994, the founder's great granddaughter and her husband, Doris and Dr. Jan Gawel, took over the responsibilities of the hotel.

Within one decade, a complete interior and exterior renovation is accomplished, and the refurbishment is realised by following the style concept of the hotel's foundation – Art Noueveau. Simultaneously, state-of-the-art technical equipments were installed.

In 2000, the banquet room “Le Bristol” was refurbished in the Wilhelminian style as well, and two years later the restaurant “Pfeffermühle” was renamed “Le Chopin”, which mirrors the importance and significance of music. In 2004, the renovation of the restaurant "Le Chopin" was realised in the Art Nouveau style. 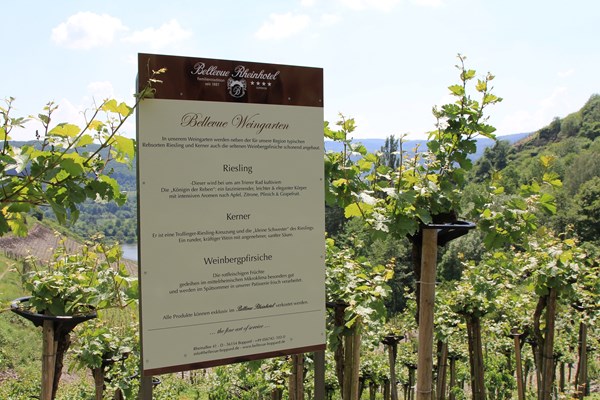 In 2003, almost 40 years after having sold the last vineyards, a vineyard of a quarter hectare in the Bopparder Hamm can be claimed as property. Grape varieties Kerner and Riesling, which are typical for the region, are grown here, and also 50 young red vineyard peach trees are added, too.

Plenty of storied famous people have visited the hotel in the past century:

125 years – and there is no end in sight - as the 5th generation has already decided for the hotel business, too.

Marek, our oldest son, works in the family business since 2012.

Liza, our second child, from 2001-2003 wine queen of Boppard, studied with Roland Burtsche at the "Colombi" in Freiburg. After "Lampart's Art of Dining" in Basel (CH), the "Cheserey" in Gstaad (CH) and the Soel`ring Hof on Sylt she graduated from the Hotel Management School in Heidelberg and now works with her husband at the "Storchen" in Freiburg.

Abel, our youngest son - while connected to the hospitality industry - has discovered his vocation in science and studied mechanical engineering at the Karlsruhe Institute of Technology. 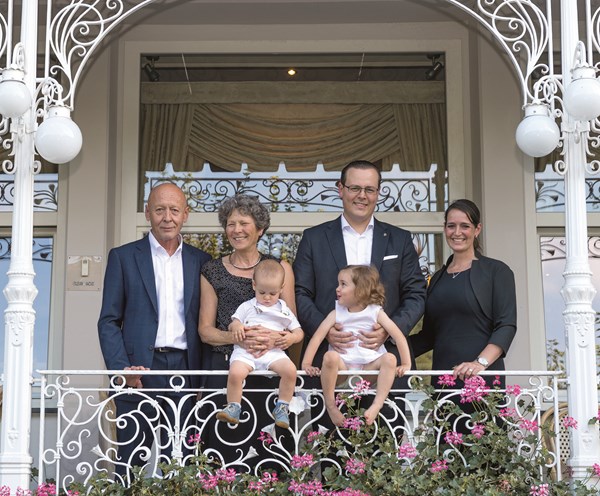 Since 2012, the great-great-grandson of the founder, Marek Gawel together with his wife Judith (born Steimer) work in the family business, and the smooth transition of management is initiated.

Marek Gawel learned the merchant profession at Hotel Hermann Bareiss in Baiersbronn. This was followed by, inter alia, stations at the Grand Hotel Kronenhof St. Moritz - Pontresina (CH), Jean-Paul Jeunet in Arbois (F) and Paul & Marc Haeberlin at the Auberge de L'Ill in Illhaeusern (F). He studied International Business at the ESB Business School Reutlingen and received his MBA from Niagara University (US).

His wife Judith Gawel (born Steimer) completed her training in the hotel business in the Hotel Traube Tonbach in Baiersbronn. Her years of travel led, inter alia, about the Eckart Witzigmann Palazzo in Hamburg, the IFH Frankfurt, and finally in the Grupo Tristán to Mallorca (ES). She then finished the Hotel Management School in Heidelberg for Hotel Business Administration and also received her MBA from the Niagara University (US).